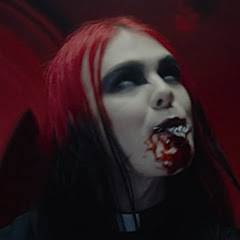 Kim Dracula is a pseudonymous Australian trap metal/hardcore music artist from Hobart, Tasmania whose songs have achieved popularity on TikTok. They are known both for original work and for metal covers of songs not typically associated with the genre. In November 2020, Kim Dracula released a TikTok metal cover of "Paparazzi" by Lady Gaga. The song was subsequently released to Spotify on 11 December 2020. Their "Paparazzi" cover acquired viral popularity within months, with six million views on YouTube, thirteen million plays on Spotify, and use in over 60,000 TikTok clips before the end of the year. The runaway success of the song propelled Kim Dracula to fourth-most followed Australian TikTok music artist of 2020, trailing Sia, Iggy Azalea, and Mia Rodriguez. Upon achieving one million plays of their "Paparazzi" cover, Kim Dracula uploaded a celebratory TikTok video with the caption "This is only the beginning ❤️". In January 2021, "Paparazzi" entered Spotify's Global Viral 50 chart, where it reached as high as number 4 on 13 January.